The long journey from Seminara to Avignon

Barlaam di Seminara, also called Barlaam Calabro, was born in Seminara in the province of Reggio Calabria in 1290. He died in Avignon on 1 June 1348.

He explored many fields of human knowledge in his intellectual life, acting as a mathematician, philosopher, Catholic Bishop, Theologian, and scholar of Byzantine music.

In terms of his religious vocation, he was a monk who was one of the most convinced proponents of reunification between the Eastern and Western churches. In an attempt to reunite the two great Christian churches, he travelled extensively by spending himself personally to create dialogue. Together with his fellow Calabrian Leonzio Pilato, he is considered one of the fathers of European Humanism.

Although much of his work has been lost, a good number of brochures containing different content are still preserved. They are usually short, but thoughtful. Surprisingly, most of them are still unpublished.

Barlaam: the man of Providence

When Barlaam arrived in Avignon from Seminara in 1342, he seemed to have been sent by providence to get Francesco Petrarca out of his splendid solitude of the idleness of Valchiusa.

In fact, the Calabrian Basilian monk knew Greek, which was rare in European culture. This was because despite the many manuscripts, codes, and scholia saved by scribes, few scholars could read and translate into Latin from Greek, as the works were translated into Latin and then read and studied. While Greek was still the language of the East, and remained so until the fall of the Byzantium at the hands of the Ottoman-Turks that took place only in 1453, in the Western courts only a few words were murmured and the masterpieces of Greek literature and philosophy stayed silent.

Barlaan was also a Greek master of Giovanni Boccaccio, the last great writer of the Middle Ages, and the first recognised humanist. In this sphere, the humanist Giannozzo Manetti is the first to mention Barlaam in his biography of Petrarch.

The poet, who was a native of Arezzo and then transferred with his family to the court of the Popes of Avignon, had devoured literature for years. He wandered around monasteries and abbeys in search of scrolls and papyrus containing Greek and Latin works, masterpieces that had survived under the ashes of medieval barbarism.

Barlaam, a lover of Sappho and Homer’s language, resolved the anguish that haunted Petrarch most of all from the rejection of his beloved Laura, teaching him Greek and making him read the masterpieces that he had in his library that were unknown to him. Among these was a volume of sixteen dialogues by Plato, the prince of philosophers, who was not by chance the pagan filter that Augustine, loved by God, used to mediate classical culture with the Gospel. The poet applied himself will to the alphabet, articles, first declension, and the theme of the present. The master praised him, but did not have time to explain to him the formation of the imperfect due to his promotion; the monk was appointed Bishop of Gerace and hastily he had to return to Calabria to get out his weapons and challenge the ministry of the oldest western Greek diocese.

Petrarch’s regret increased when, with the help of Province’s good wine, he managed to get the ambassador of the Eastern Empire to donate a manuscript of Homer to him.

A long time would pass, and the now old Petrarch would have to suffer the mourning of Laura, and that of Barlaam himself, until Boccaccio gave him a copy of Homer translated into Latin by Leonzio Pilato, another great Calabrian. 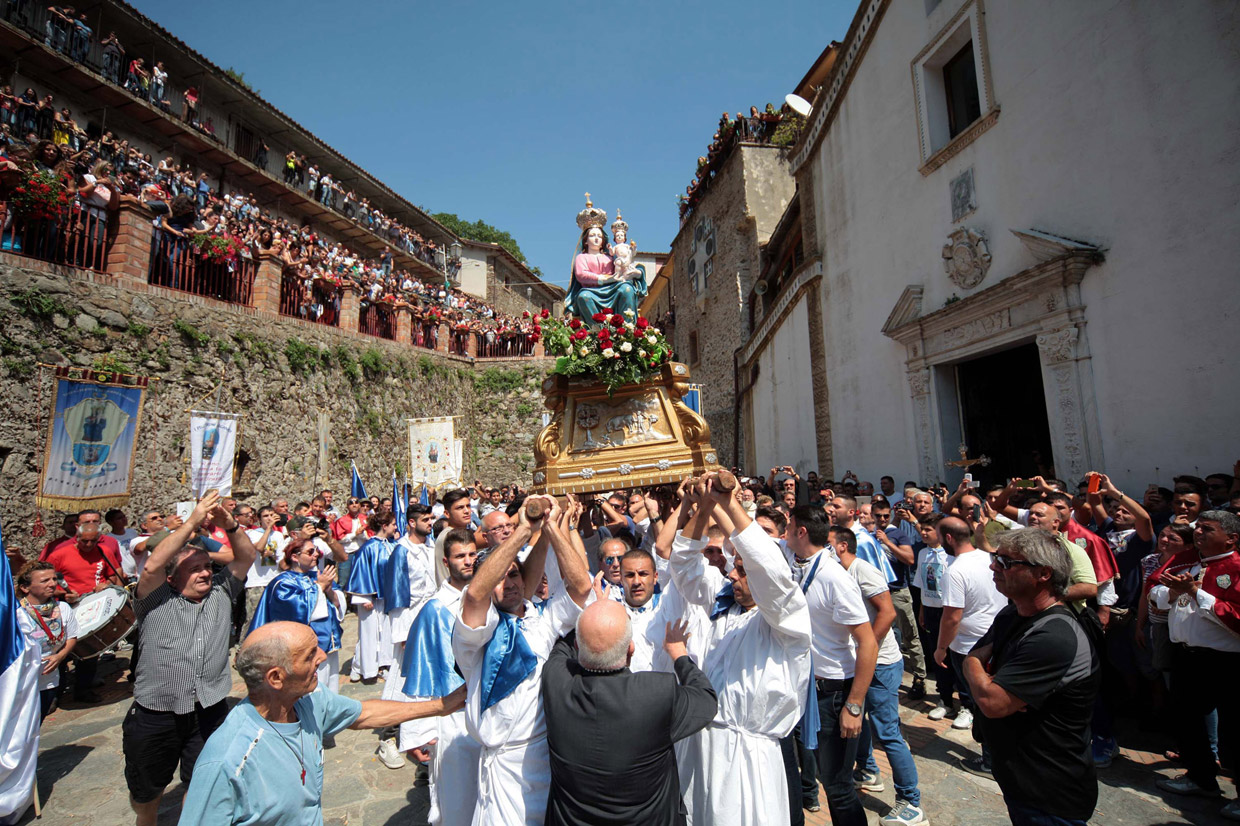 The Festival of Madonna di Polsi

The Festival of Madonna di Polsi