From France with charity and love

Born in Montpellier in the Middle Ages, Rocco trained at the university of his hometown. Orphaned, he decided to donate all his possessions to the poor and become a pilgrim. An Epigone and devoted followed of St. Francis of Assisi, he embarked on a long journey towards Rome during which he crossed towns and regions devastated by the plague. He then dedicated himself to taking care of the needy and plague victims, showing immediately thaumaturgical gifts that allowed him to cure the disease by touching the infected wounds. His reputation as a healer precedes him; after three years in Rome, Rocco decided to return to France, but during his return journey after surviving the plague, he was mistaken for a spy. Arrested in Voghera, not even his relatives could recognise him. He died in prison on 16 August 1379. He was canonised as a saint by Pope Urban VIII in 1625.

The feast of St. Rocco in Palmi

During the plague that struck the town of Palmi in 1656, there was not a family that remained immune to the deaths of the devastating disease. The inhabitants, weakened in morality and spirit, then decided to address their prayers and intercessions to San Rocco. After obtaining the grace that interrupted the plague, the cult of the holy healer spread rapidly, surpassing in time also that of St. Nicholas, patron of the city since its foundation.

Since then, on 16 August every year, the civil and religious community honours St. Rocco with a feast that attracts thousands of people from all over the world. In fact, due to its religious and ethno-anthropological characteristics, the event represents a unicum around which numerous studies and research has been conducted. The feast begins in the morning, when Palmi is brought to life with the sound of the drums that accompany the figures of the Giants, papier-mache statues that dance rhapsodic rhythms through the streets of the town. All of this while the faithful begin to gather at the little church, Immaculate Conception, where during the year the statue of St. Rocco is hosted, paying homage to the saint with prayers, offerings, an votive offerings in wax, signs of healing, and thank you notes.

Late in the afternoon, at sunset, all of Palmi moves towards the church. From here, twenty-four bearers carry the effigy of St. Rocco in a procession for a good seven kilometres. The procession opens with the procession of the “spinate”, two hundred people arranged in two rows. The faithful who carry the characteristic spalas on their heads, a bell made of intertwined broom thorns, bell bushes made of brambles. Barefoot, bare-chested men wear white canvas trousers and bear an image of the saint on their cheasts; the women instead bear on their heads a crown of thorns in memory of the crown that Christ wore in his descent to Golgotha. The procession ends with a fireworks display, after having crossed all the districts with more than four hours of walking. 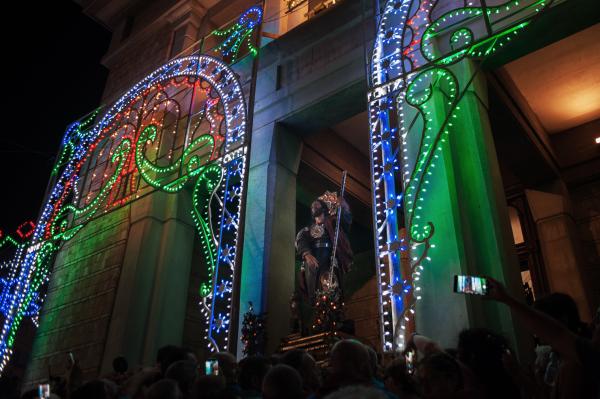 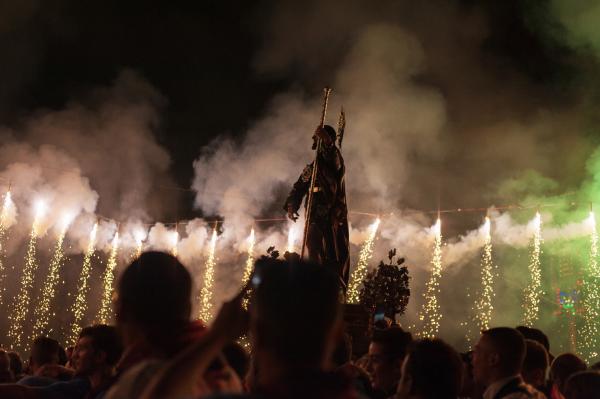 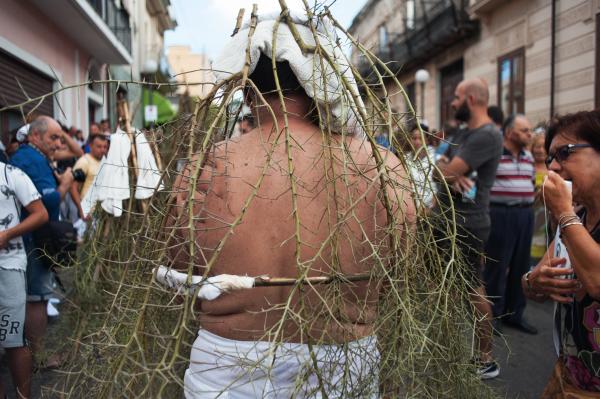 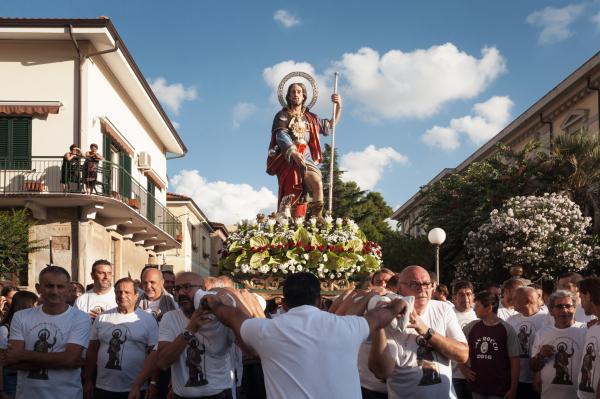 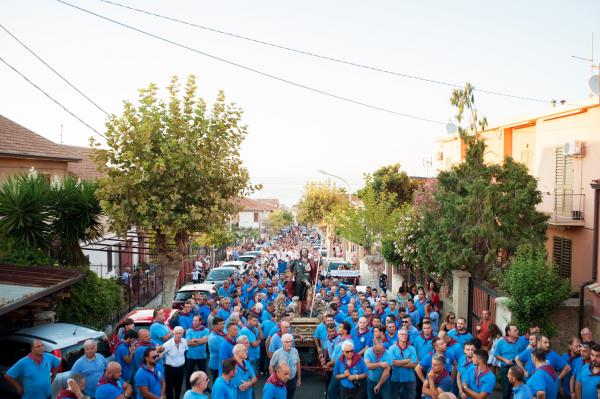 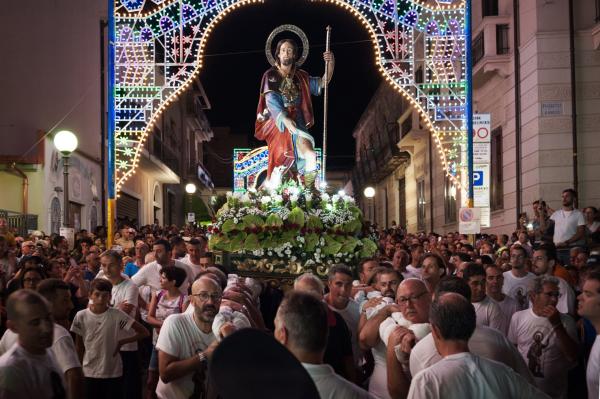 The Feast of St. Rocco in Scilla

A letter from Monsignor Annibale D’Afflitto, on a pastrol visit to Scilla, bears witness to the presence of a charitable brotherhood in the town dedicated to the holy miracle worker since 1595. Through the intercession of St. Rocco, Scilla was miraculously freed from the plague that had struck much of the province of Reggio at the end of the 15th century. It elevated the Montpellier native to patron saint of the town, replacing St. George.

Today in the church that bears his name, there are two statues: a marble and wooden one that is carried in the procession during the patron feasts of August. The statue made of precious Greek pario marble comes from Venice, the city in which after his death his remains were moved, and the city in which the sailors of Scilla, who engaged in commercial trade with the maritime republic, asked for material and spiritual help to overcome the plague. Two relics and the aforementioned state in Byzantine-Venetian style came from the lagoon, which has since become a symbol of the bond between the faithfully devoted in Scilla and the saint. There are numerous legends hat also revolve around the wooden statue. In fact, even though it was commissioned to various artists, it was not completed until the beginning of the 18th century when a pilgrim arrived and proposed to finish the work.

Closed in the sacristy of the St. Rocco Church to concentrate on the creation of the statue, he refused to provide news of his well-being for days. The inhabitants of Scilla, worried about the fate of the unknown artist, forced the doors and with wonder and fascination saw the completed statue, with no trace of the man and the saint’s face that was in every way equal to that of the mysterious artist. The feast falls on the Friday, Saturday, and Sunday after August 16, the days in which the saint is carried in a procession along the main streets of the three districts that make up Scilla: San Giorgio, Chianalea, and Marina Grande. The long liturgical procession winds between the two wings of the faithful who accompany the procession equipped with giant lit candles called “nthrocci.” The statue, affectionately called “San Roccheddu”, is brought back to the main church on Sunday evening in a blaze of fireworks that light up the entire Strait of Messina, a spectacle that attracts thousands of tourists. The entrance to this church is called “Trionfino”, in memory of St. Rocco’s triumph over the plague and its veil of death.