Built on an ingenious system of terraces that from the side of Mount Sant’Elia gently slope down the Tyrrhenian Sea, Palmi is one of the most vital cities of Costa Viola and the Tyrrhenian Reggino, rich in history and natural beauty. Already inhabited in the Bronze Age, as evidenced by the findings in the numerous caves that characterise the surrounding area, Palmi rises on the ruins of the mythical city of Taureana, destroyed by Saracen pirates in 951 AC. Cyclically plagued by earthquakes and natural disasters, always rebuilt by its industrious inhabitants, today the city presents a unique structure of its kind, composed of terraces from which you can enjoy an exceptional view of the Messina Strait, placed at different heights and connected by crags, cliffs, and small beaches. The coast stretches from Capo Barbi, the first bastion of Costa Viola, embracing Punta Motta, the bay of Marinella and the bay of Tonnara, dotted with sea and coastal caves, beaches suitable for every need, and imposing rocks, which stand out in the crystal clear waters.

The beaches and caves of Palmi

The territory of Palmi is rich in its natural beauties that must be seen, among which the cave of the sirens, the Arcudace cave, the Perciata cave, and the Tràchina cave are included, in which various archaeological artefacts have been found. The Marinella beach is delightful, with its tiny seaside village that rises in the bay of the same name.

The not-to-be-missed beach of this stretch of the coast, however, is without any doubt Tonnara beach, located in the bay of the same name because of the ancient construction once used by the locals for the storage and processing of the beautiful tuna captured off this beautiful coast, which counts on almost 2 km of white sand and crystal clear sea that is framed by the Agliastro rocks to the south and the remains of an ancient cliff to the north. The complexity of the Agliastro rocks is a unique spectacle in all the world: a series of rocky islets detached from the fine white sand of the beach, among which the olive tree cliff stands out, a rugged rock shaped by the waves of the Tyrrhenian sea on which an olive tree has stood for over 400 years, lonely like a guardian.

This beautiful bay, perfect for both diving and snorkelling and those who love the simple pleasures of the beaches such as the sun and refreshing swims, is located right in front of the mountainous bastion of Sant’Elia, which here takes the form of a sleeping lion. In its vicinity there is also a small port dedicated to tourists and fishermen: here you can buy fresh fish directly from the boats of organise a boat trip among caves, cliffs, and wonderful hidden beaches.

Near the Tonnara beach there is also Pietrenere-Scinà beach, which takes its name from the neighbourhoods located in its vicinity. The Trachini rocks are very impressive, in front of the beach of the same name that reachable only by sea, and the Pietra Galera.

Trekking enthusiasts will adore Cala di Rovaglioso, which can be reached via a steep path carved out by the cliff rock, trying their hands at the Tracciolino path, an ancient 7 km long trail that joins Palmi with the nearby Bagnara, and which can count on a breath-taking view, resulting in an unforgettable immersion in the scents and colours of Calabria. The pristine beaches of Palmi earned 3 Municipality blue flags from Legambiente in 2014.

What to see in Palmi

A visit to Palmi where you must limit yourself to the beaches would be a real shame. Indeed, the area offers attractions that will entice everyone. An essential visit is one to the historical centre, a youthful village rich in cultural activities and shows that attract tourists in its numerous squares and on the prestigious street full of commercial activities.

Palmi presents a unique urban architecture, based on a system of terraces that have been renovated several times following multiple destructions of the town. An ideal walk through the historic centre passes—in addition to the numerous and lively squares—many stops not to be missed: the Palma Fountain, which survived the scourge of Calabria, the earthquake that in 1783 destroyed the entire province of Reggio, that today is proudly displayed in piazza Amendola; the marble complex of the Fountain of the Canals, located in Piazza Lo Sardo, which in the 19th century was one of the main water supply points of the city; the Casa della Cultura (“House of Culture”), which houses the art gallery, municipal library, two museums dedicated to music and ethnography and folklore, a large and pleasant garden and other attractions waiting to be discovered.

At the top of the town stands the splendid Villa Comunale, a luxurious botanical garden built on the ruins of the 16th century citadel; from this privileged terraced balcony you can enjoy a wonderful view of the Messina Strait, Sicily, and the Aeolian Islands. The archaeological area of Taureana, with its three hectares of extended land, deserves a thorough visit, as well as the Tower of black stones, locate in the park area, and the Pietre Nere Fort built in the 1700s by the French architect Gioacchino Murat and located in the district now called Lido di Palmi. Archaeology lovers will also appreciate the Temple of San Fantino with its paleochristian crypt, located in the small district of Taureana.

Every five years the Festival of Varìa is held in Palmi, a huge 16-metre-high sacred chariot that is carried on the shoulders of 200 mbuttaturi (porters) on which are represented the assumption of Mary in heaven and the entire universe. Some human figures are also represented in Varìa. The festival, which attracts thousands of people at each edition, has been included on UNESCO’s list of oral and intangible humanity heritage sites. 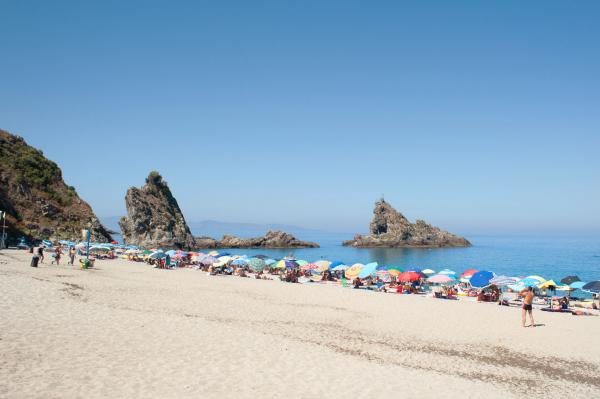 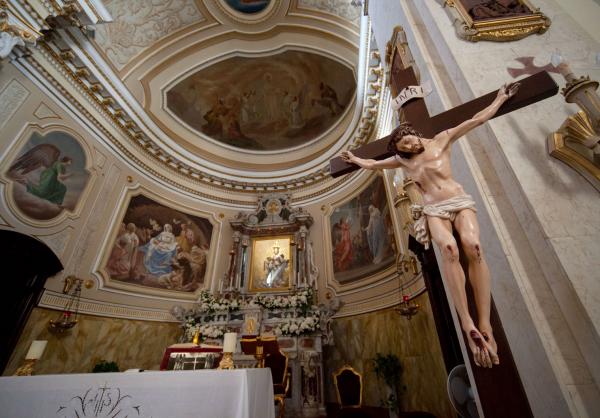 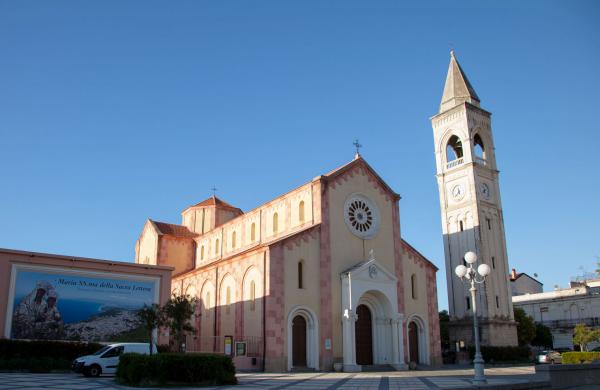 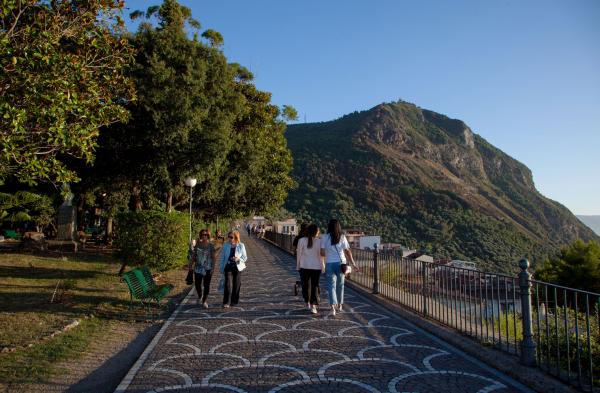 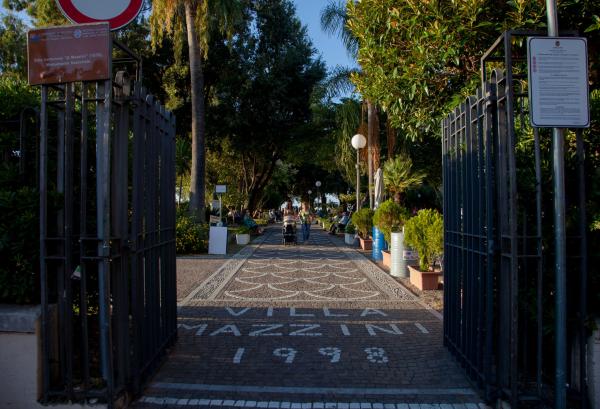 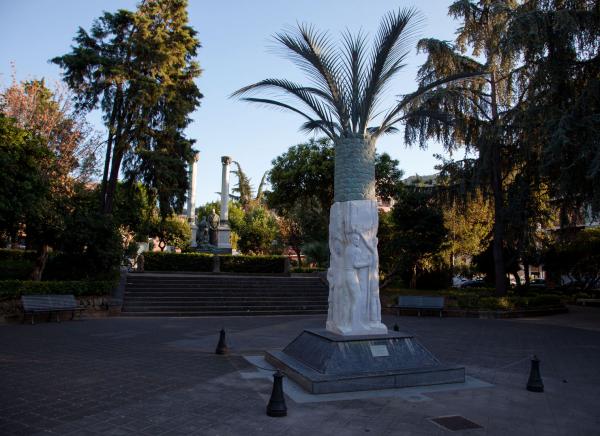 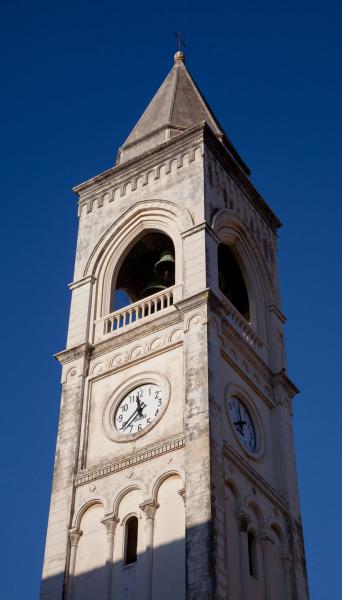 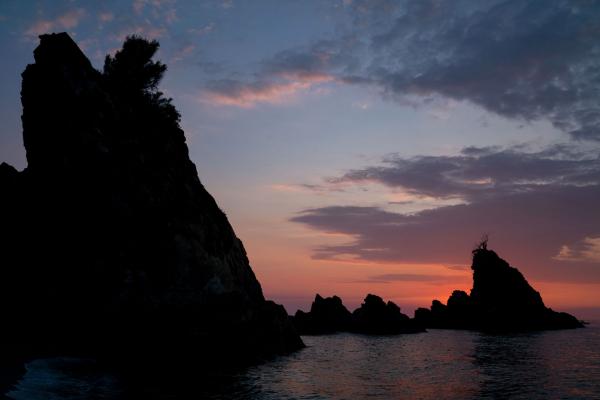 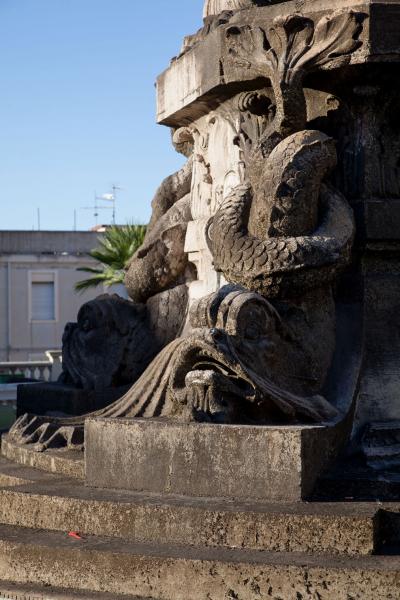 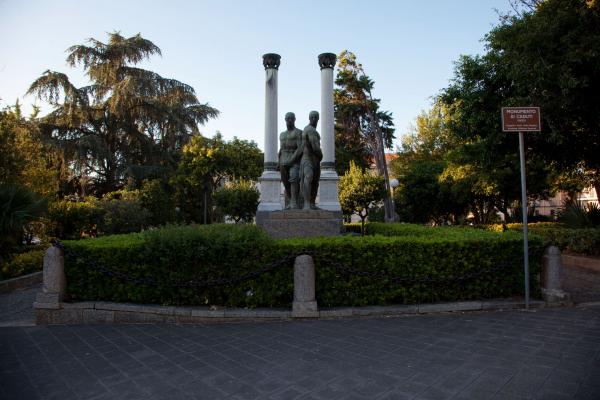 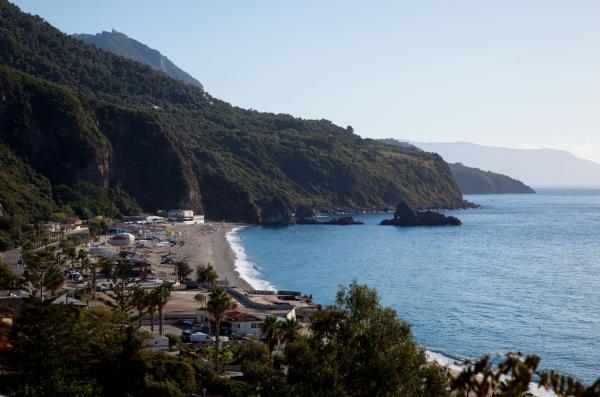 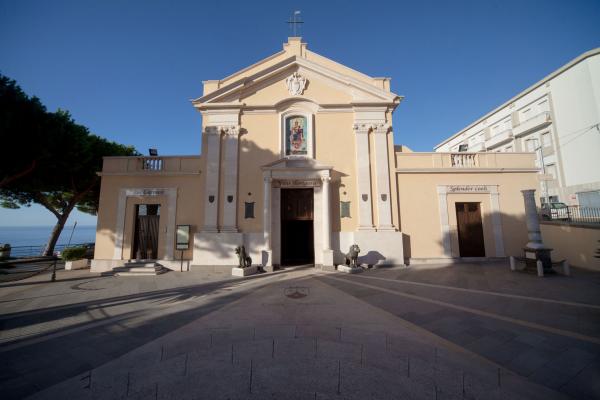 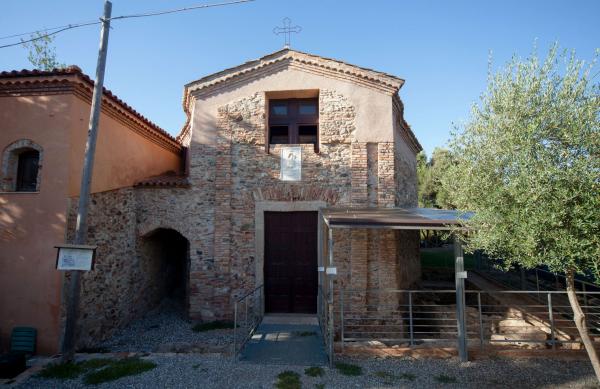 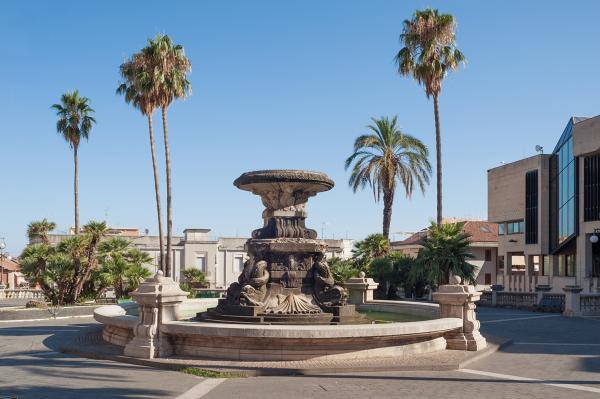 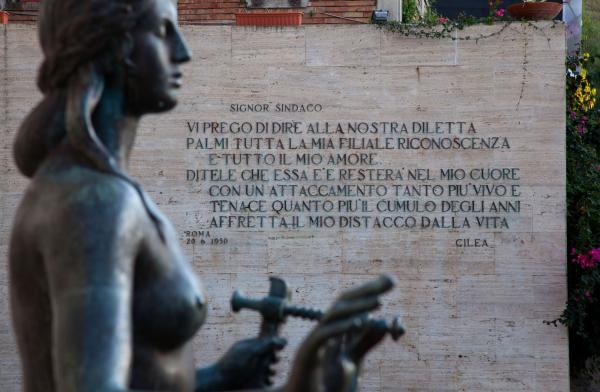 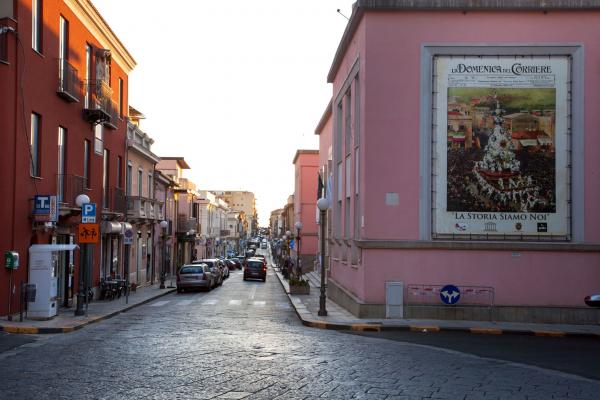 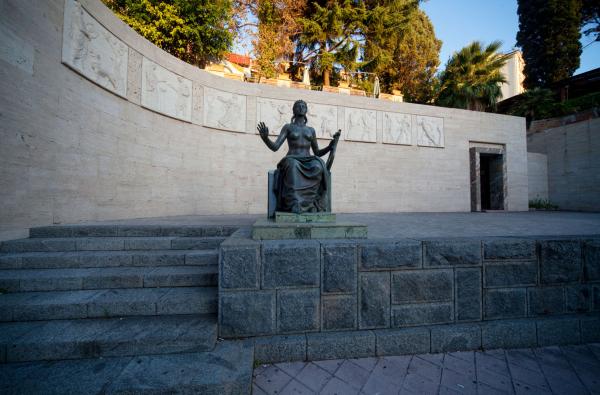 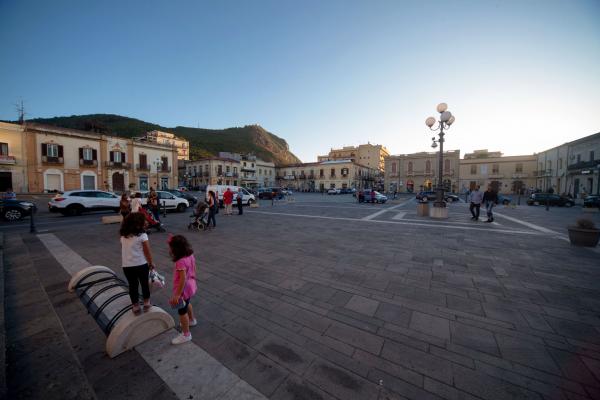 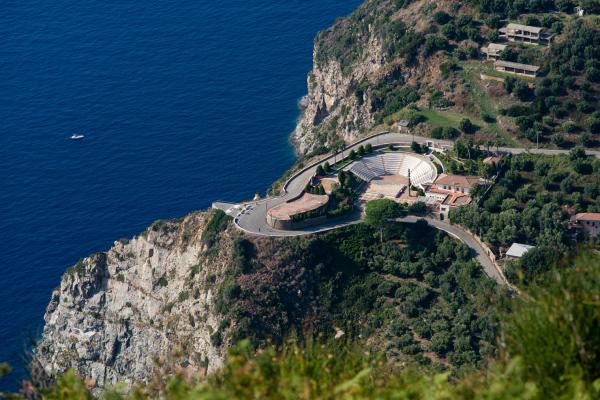 The food of Palmi

The gastronomy of Palmi falls in line with that of the province of Reggio Calabria, but in some cases, it presents a reworking of flavours and dishes that cater to bittersweet tastes such as salmoriglio, which here is prepared in a very particular way and is a fundamental element in many fish recipes.

Among the tastiest fish dishes in this wonderful village—in addition to the swordfish, for which this area is famous—the spicy tomato grouper stands out, rigorously prepared with Calabrian pepper, Tropea onions, and the very tasty cherry tomatoes of these lands. Palates that prefer meat will undoubtedly appreciate macaroni alla pastora, which combines the full-bodied sausage of the area with the delicate taste of ricotta with the pungent pecorino, while vegetarians will appease themselves with Calabrian stuffed aubergines.