Overlooking a gentle curve on the Costa dei Gelsomini, Roccella Ionica is mirrored on a band of the Ionian so clean and crystalline clear that it has won several blue flags and other important environmental awards.

Surrounded by a beach of fine white sand and rolling green hills, the town has ancient origins that date back to the Greek colonization of the city of Amphisya, subsequently taking the name of Aracella (and then Roccella), in medieval times due to its location on a cliff that plunges precipitously into the Ionian sea.

Rich in archaic traditions such as the SS. Maria delle Grazie marine procession and the ‘ncrinata ‘i Pasca, a veritable processional pantomime that involves the statues of Mary, Jesus, and St. John, Roccella Ionica is an interesting destination all year round but is at its best in the summer thanks to its dreamlike beach, served by an elegant and well-organised tourist port and the historic Roccella Jazz Festival - Rumori Mediterranei (Sounds of the Mediterranean), which has passed through thirty-nine editions, important guests, and a strong international reputation.

What to see in Roccella

Not much is left of the of the mythical city of Amphisya, beautifull referred to by Ovid in his poems, but in the hills behind the village, in the town of Sant’Onofrio, numerous artefacts have been found that are connected to metropolis from the Iron Age, preserved in the National Museum of Reggio Calabria.

The ancient inhabited centre develops around the fortress that stands out against the sea, from which the town took its name. Here stands the castle in which the princes of Carafa dwelt; the ancient medieval citadel that winds around the castle is bounded by the Zirgone stream and the Tower of Pizzo Falcone.

The historic centre features interesting noble palaces, villas and churches that tell stories of an ancient past. The Carafa princes lived in the castle until 1806 and among the remains of the ancient city walls and decorations of the historic buildings; one can see the traces of splendour of their court, and from even earlier times, of the Ruffo. Even the Convent of the Minimi, built in 1590 and now home to some university services, the tourist infopoint, manifestations, and cultural events of an international scope, is worth visiting.

Between the waterfront and Piazza s. Vittorio stand two giant monolithic columns in Egyptian porphyry, almost 7 metres high and weighing about 12 tons. These columns, called Colonne Melissari, were in 1868 in perfect condition, and were probably part of a pagan temple of which, however, no other traces were found. The mystery of the columns has given rise to several hypotheses, some extremely imaginative. 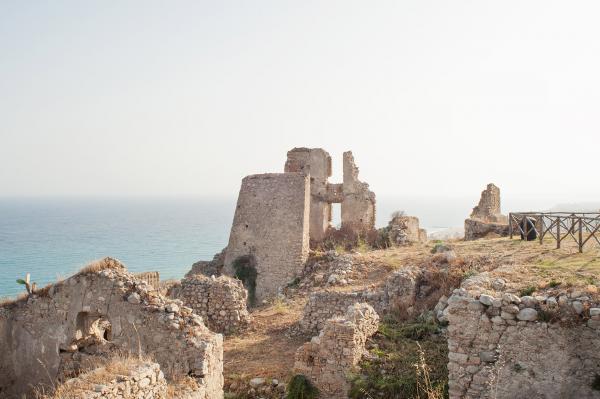 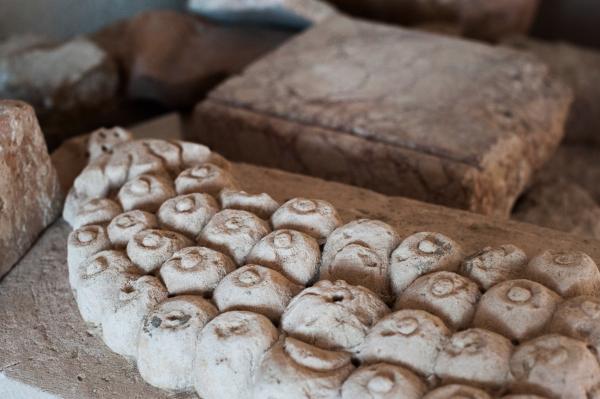 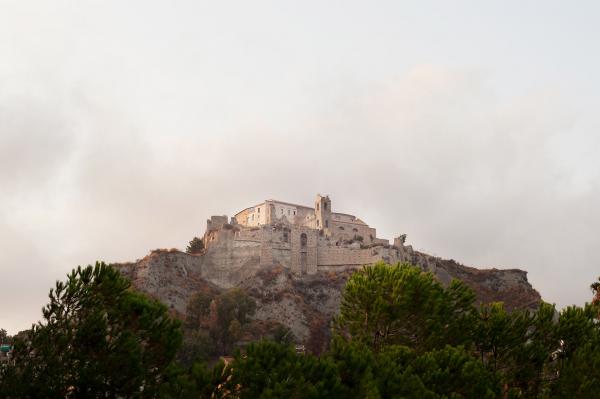 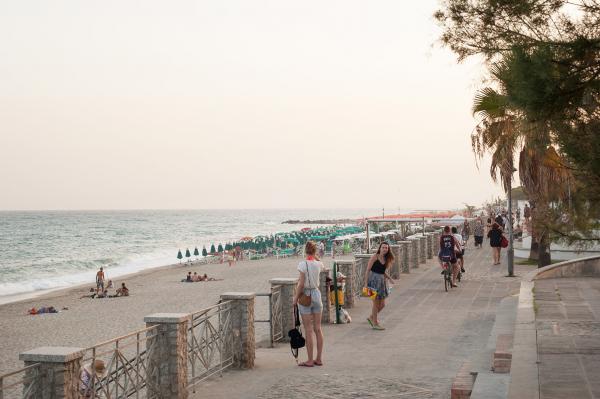 The Roccella Jazz Festival - Rumori Mediterranei (Mediterranean sounds) is an annual summer tradition. In general, the most important events take place in August, with some preview shows in July, and sometimes, a winter event during the Christmas period. The festival, which is in its 39th edition in 2019, can count on a following that involves thousands of spectators and is internationally renowned. Ornette Coleman, Cecil Taylor, Steve Lacy, Lester Bowie, Jan Garbarek, Chick Corea, Bill Frisel and the Sun Ra Orchestra are among the various talents that have taken the stage at the Roccella Jazz Festival.

The artistic direction pays a lot of attention to the annual theme, cultural interaction, and new proposals on the music scene, thus making the Roccella Jazz Festival an important springboard for emerging Italian artists or as a confirmation of success from the public and critics. The festival is not without tributes to artists who have come before, such as Folia - The Roccella Variations composed in 1989 by George Russell for the festival itself. Initially the festival took place in the amphitheatre at the foot of the castle but briefly conquered the entire town, carving out a space in the school courtyards, the main squares, and the Convent of the Minimi.